As planned, on Saturday, July 23, 2022, Long Hai Security Service Joint Stock Company and the Company's Union held a Sports Day for departments and teams in the South. The event opens at 7:45 am and ends at noon.

Our recap video of our event

July 23, 2022, at 06:30 am. The departments in charge simultaneously deployed in the competition area, drinking water for fans and athletes, checking the sound system, testing the machine, the organizer's table area, the running track, etc.

At 07:15, the organizers agreed on the changed details due to comments from the referee team.

At 07:30, the organizers were ready to open the sports festival. Still, due to the missing 26 athletes traveling and stuck in traffic, the organizers agreed to postpone it to 07:45. At 07:45, the President of the Company's Union, Mr. Tran Chau Giang, said, gave the opening speech. Then, the Head of the Organizing Committee – Mr. Phan Nam, announced the opening of the sports day.

Despite the early morning sunlight in the stands, the fans were still enthusiastically chanting slogans to support the "home athletes," especially the fans of Team Ho Chi Minh East 3 and Ho Chi Minh Center 7. With tapes, headbands, large banners held in hands, and handheld speakers to keep their group in sync with their chants, they create a vibrant and passionate atmosphere and are an excellent catalyst for athletes to compete.

Starting with the women's 100m sprint, after the athletes entered the starting position, the referee was ready, the cameraman gave the ready signal, the starting signal sounded, and three athletes in the first competition group staggered, threw strong steps, rushed forward, but unfortunately for the athlete on lane 1, after starting about 20m, she tripped and fell. However, she got up to continue her race, but only after approximately 5m; our athlete continued to fall for the second time and was forced to need the help of the medical team to give first aid to 2 scratched and bleeding knees. 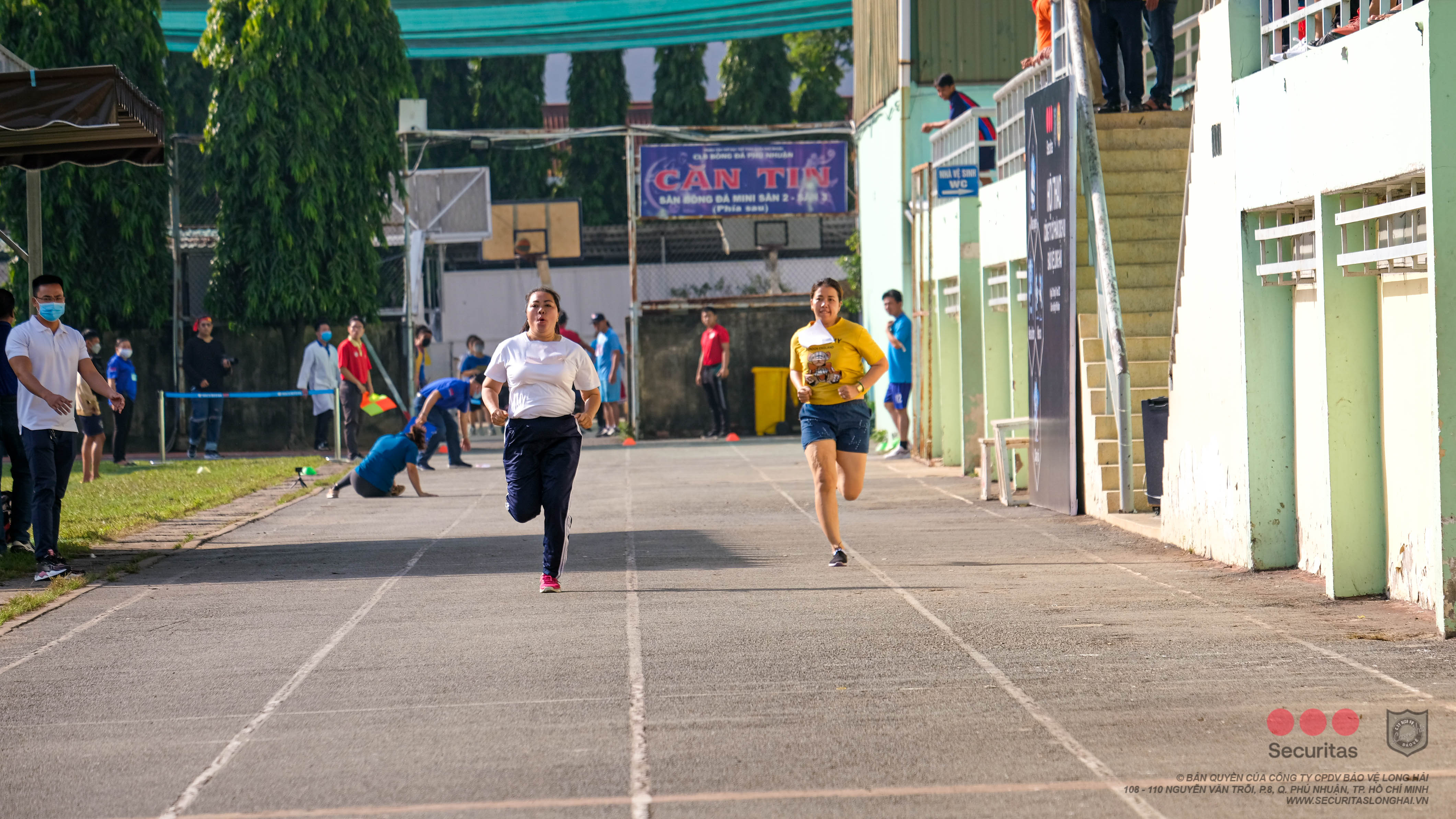 However, with inherent calmness and endurance, our injured athlete quickly reintegrated with the fans in the stands and cheered on the next runs of her colleagues below. Watching them and cheering proudly at our athletes.

Next up was the pull-ups competition, a sport where there were only male athletes competing. The first prize belonged to athlete - Nguyen Van Nhat (with 25 successful pull-ups). 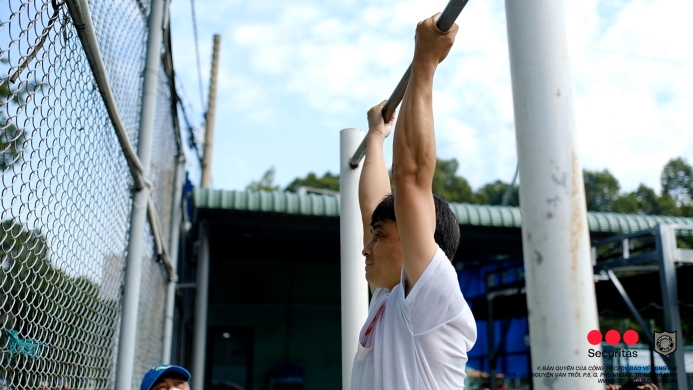 Then came the 400m sprint, martial arts, and the 200m relay (after the organizers re-evaluated, it was decided to give up the form of athletes carrying a 5kg fire extinguisher to run because it could be dangerous for athletes.) 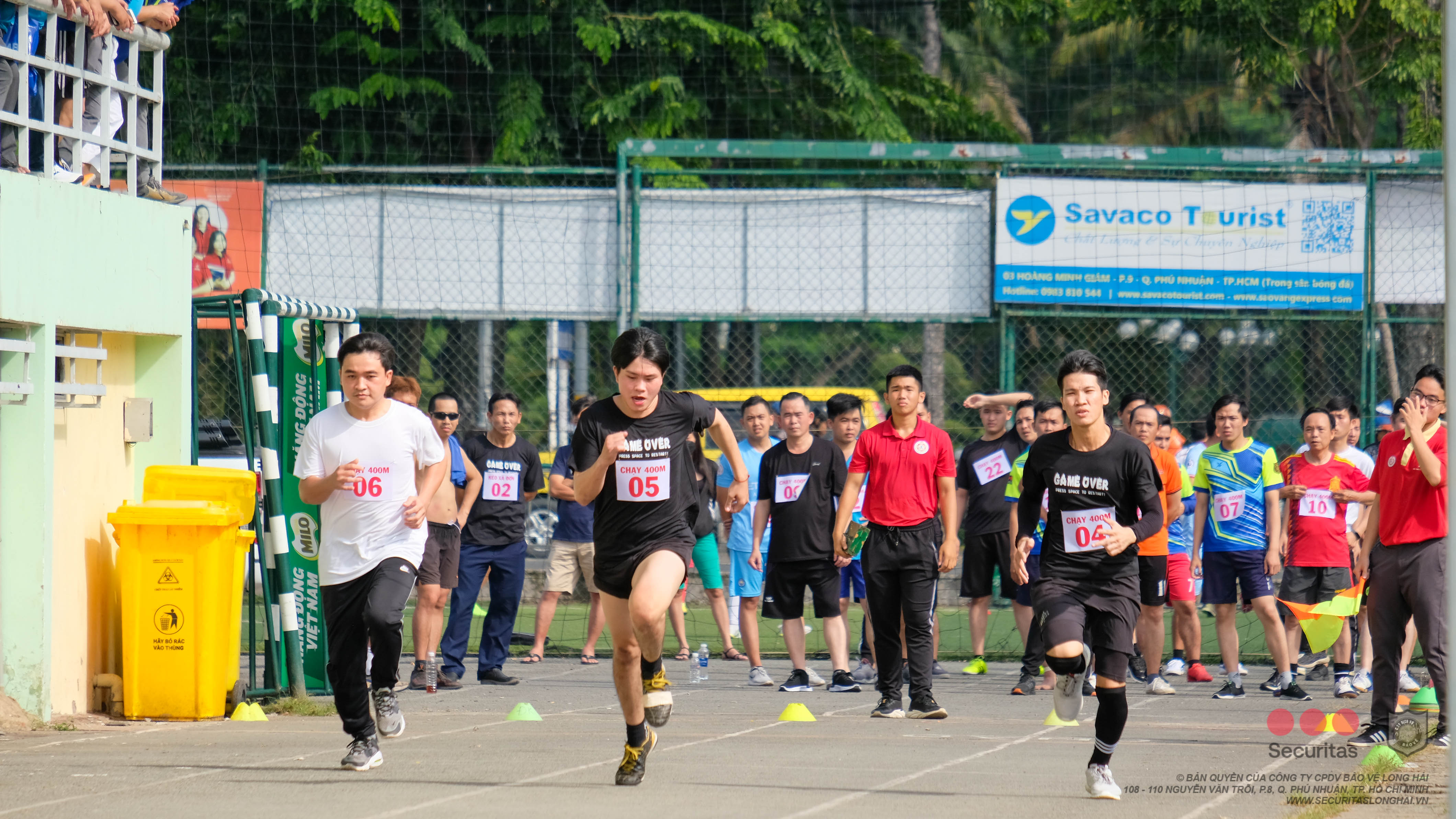 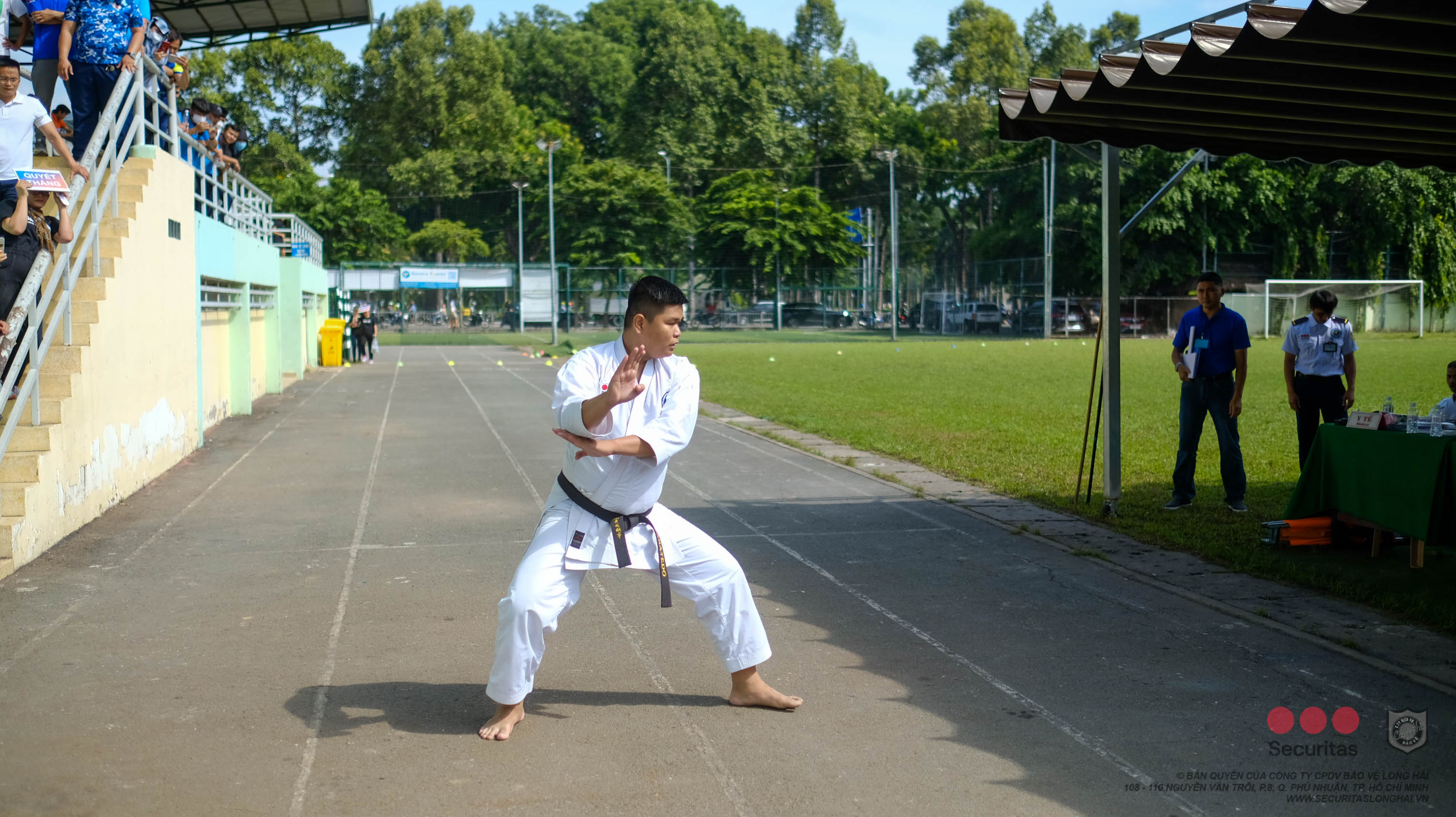 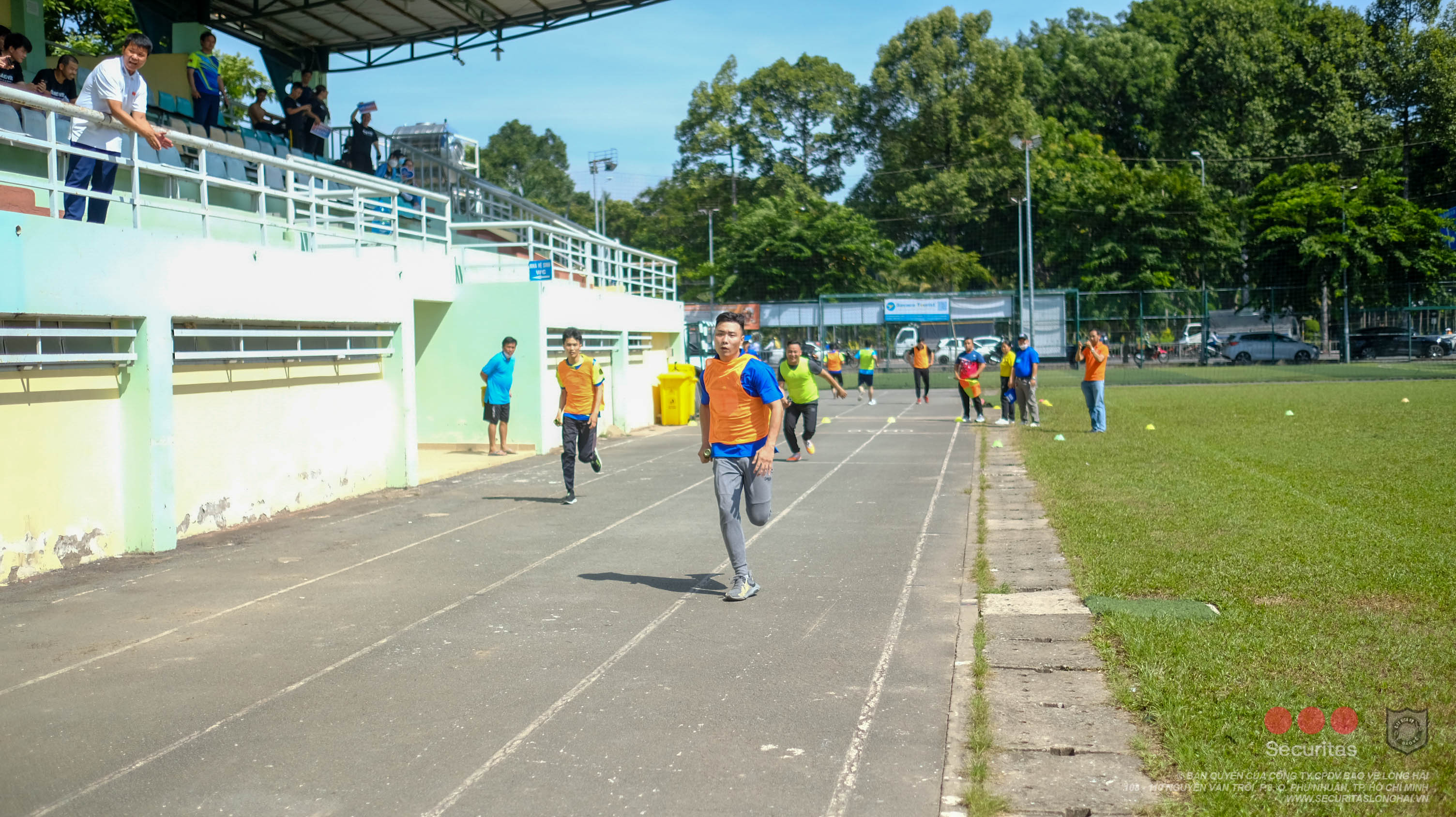 It all took place in an atmosphere where the cheering was highly passionate in the stands of more than 150 fans from the teams that attended. Combined with pleasant weather, the sun was high, but it was no longer directed toward the stands; sometimes, each large cloud created a shade mixed with a few gentle breezes as a trigger to fuel the high competitive spirit of the athletes.

10:15: It's time for the final competition of solidarity and collective strength—tug of war. 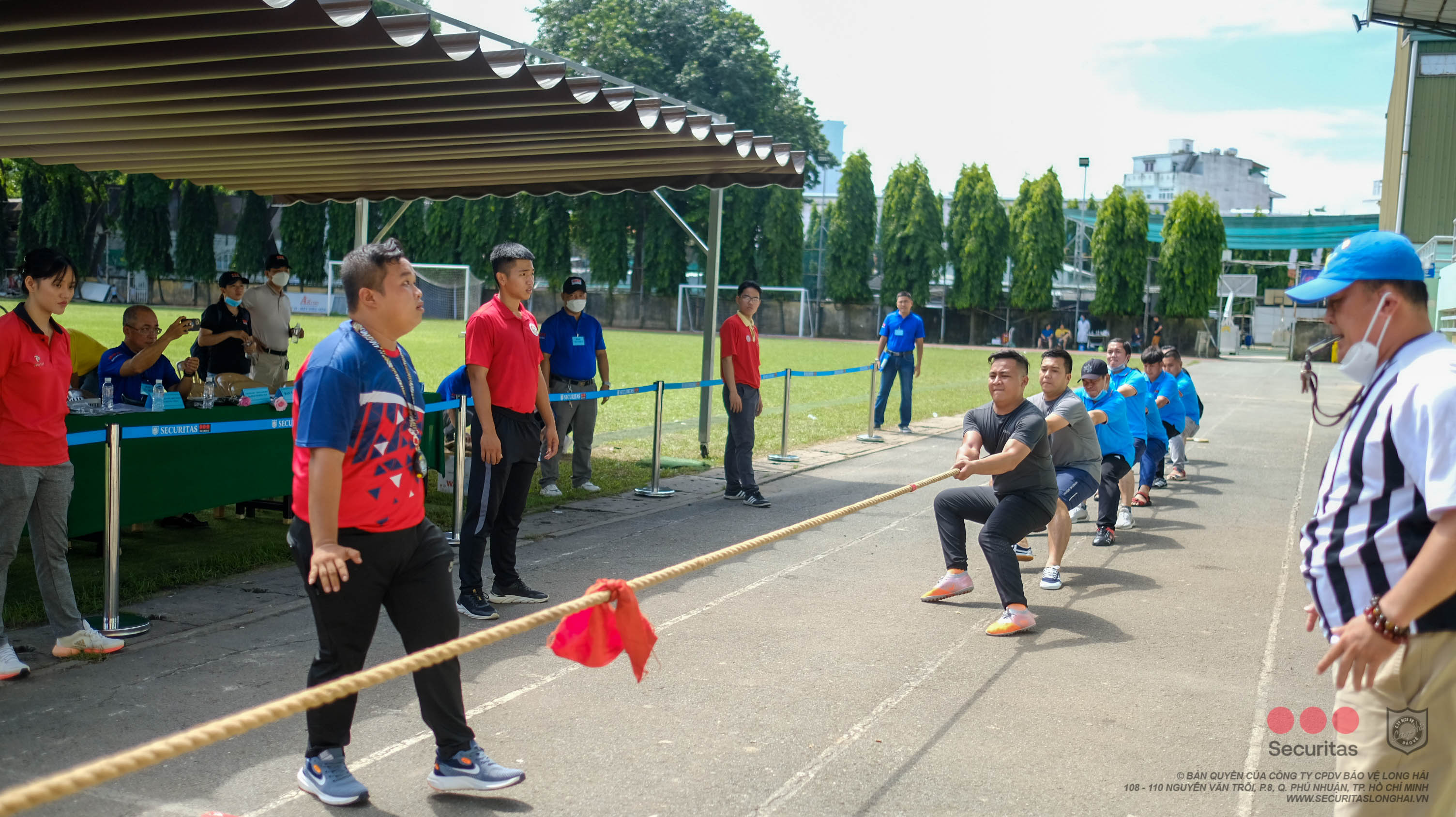 In the stands, the fans gathered in a long line with colorful flags, fan shirts, posters, and cheerleaders, creating an attractive competition atmosphere.

TOOT! TOOT! The whistle blew, followed by the shouts of the group leaders, the lively music from the loudspeakers, the MCs reminding the rules and illegal behaviors, the cheers of the fans... We, the organizers, understand that we have succeeded in today's game. 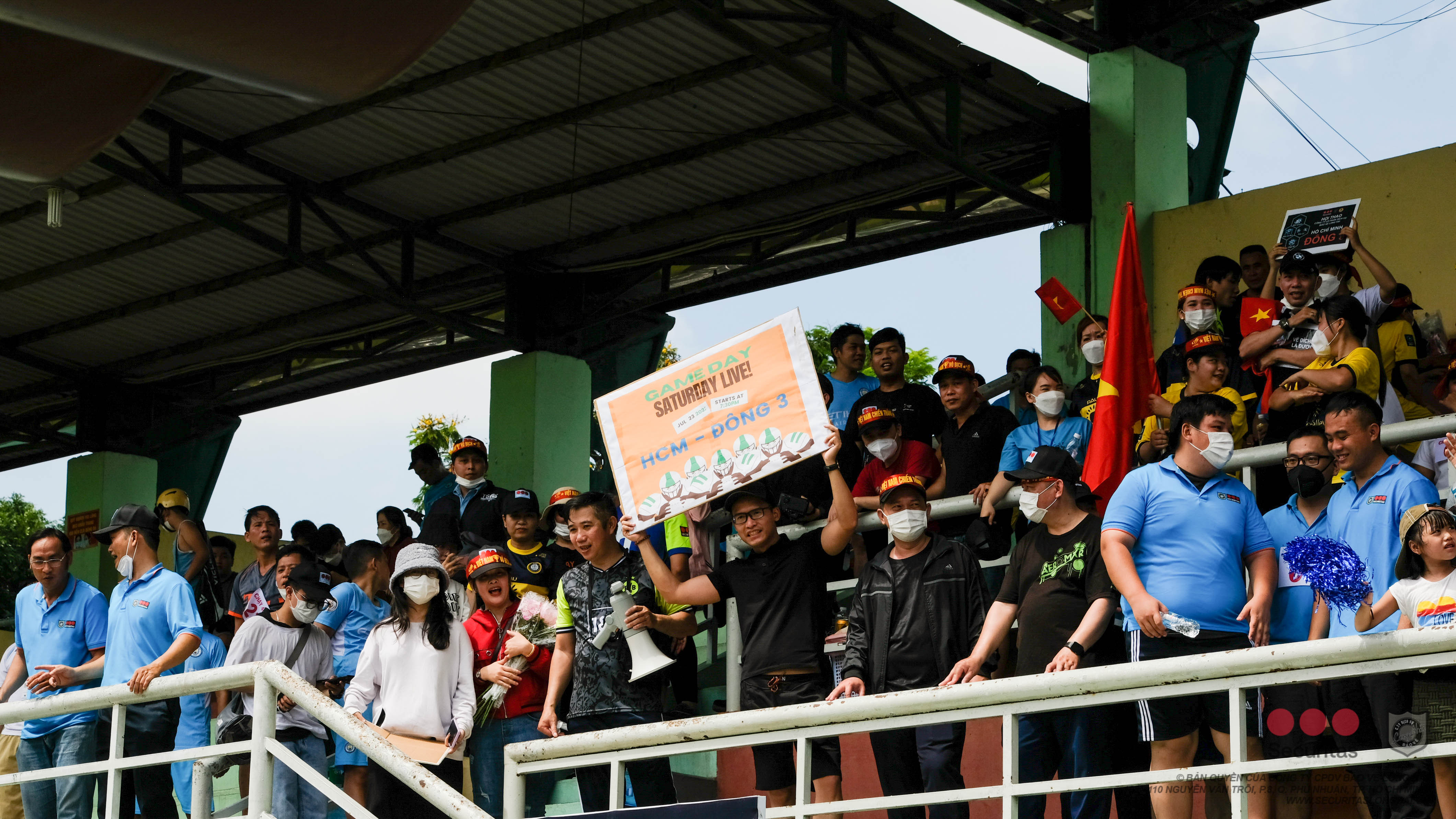 11:15: On the table, the organizers have the results of the competitions; MC announces that the fans and athletes move to the big poster area to attend the awards ceremony. 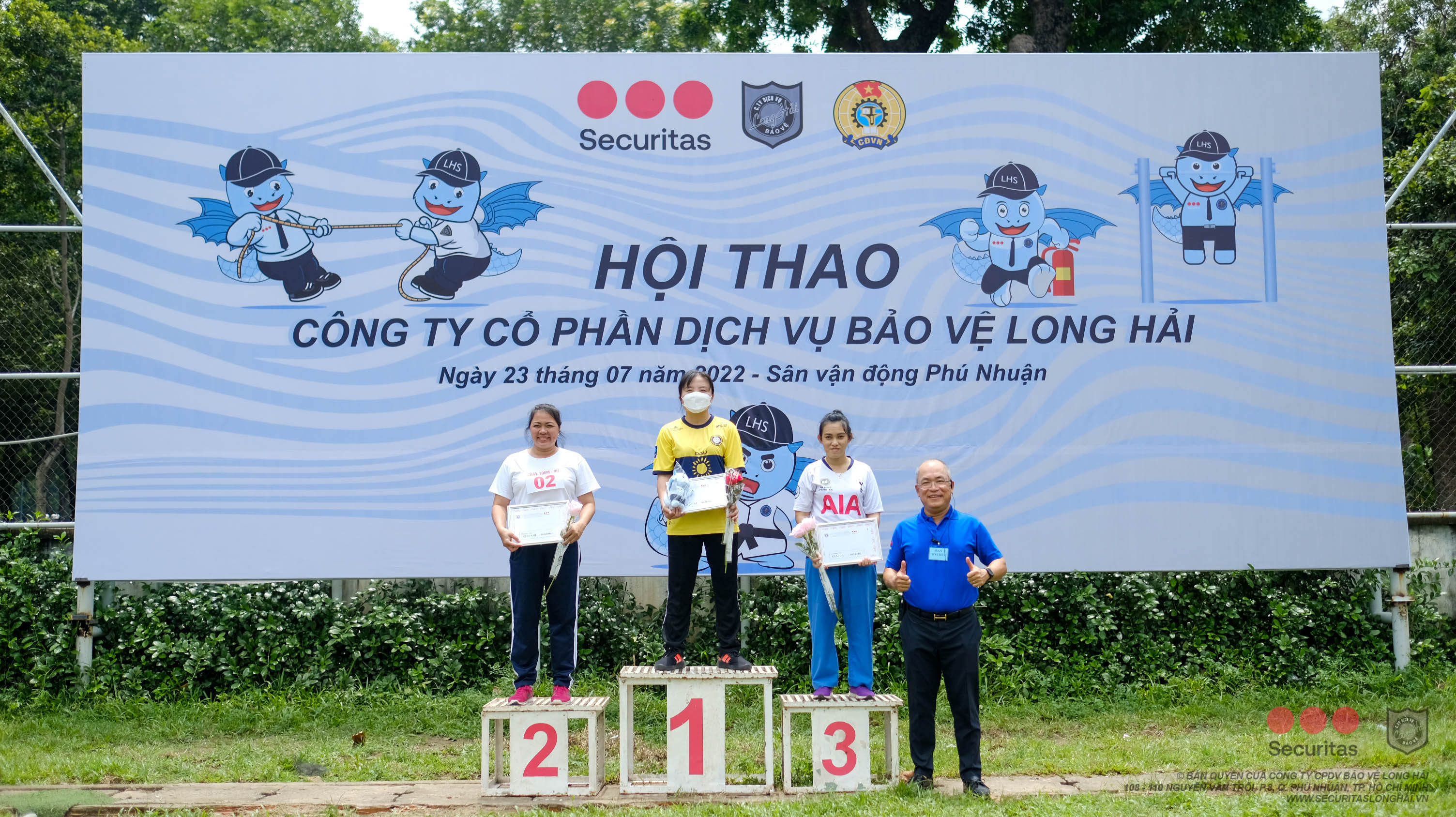 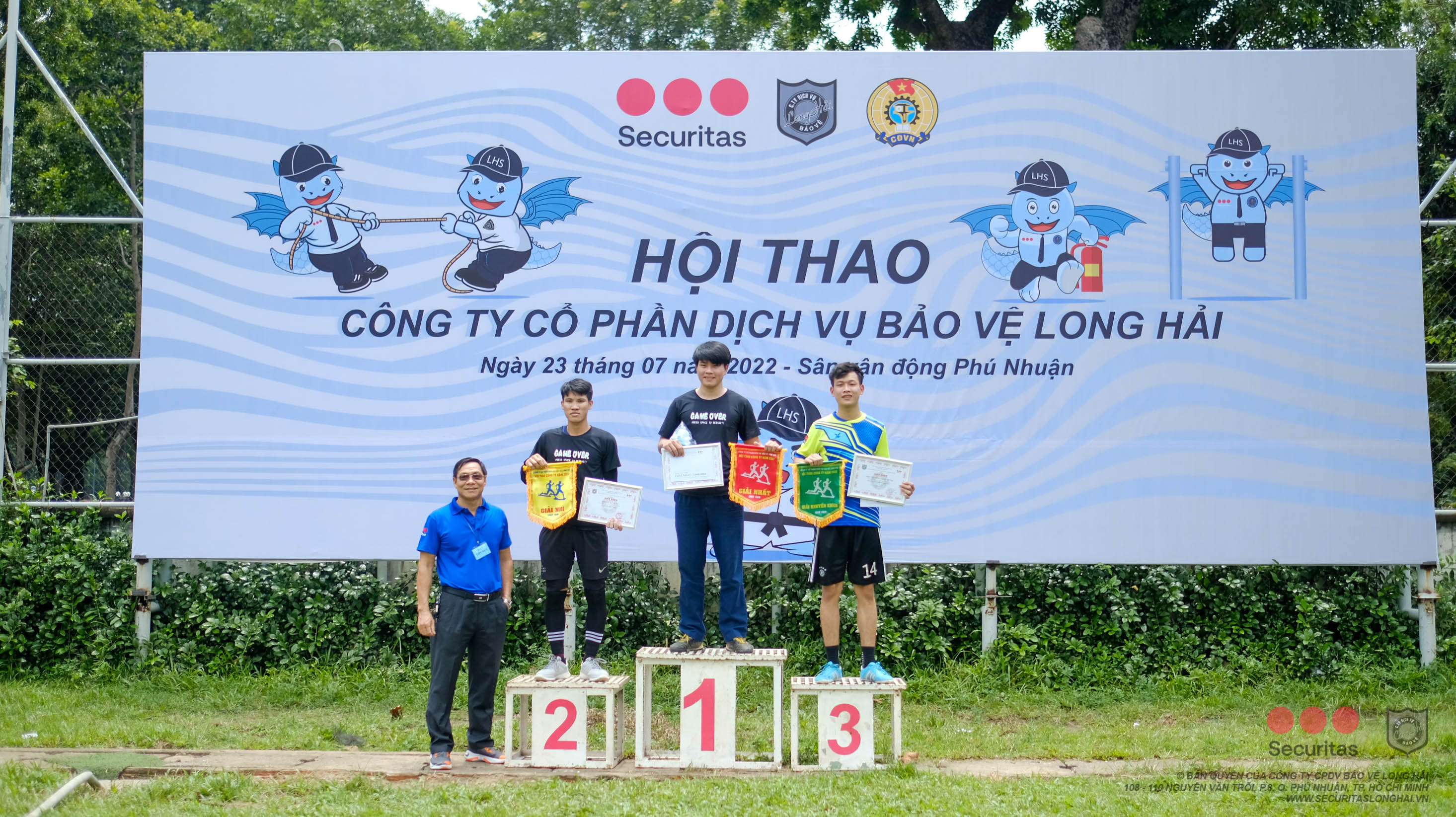 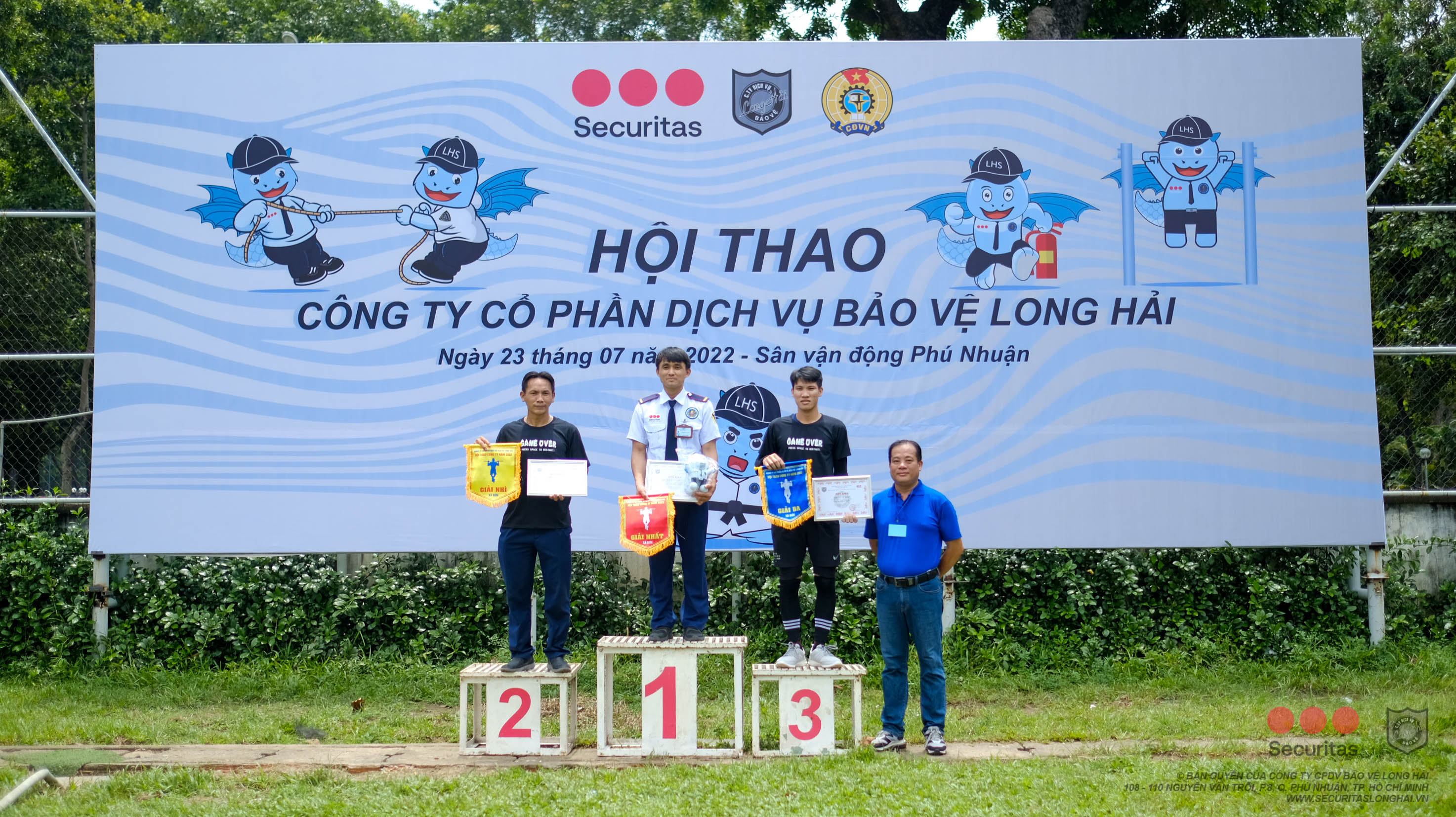 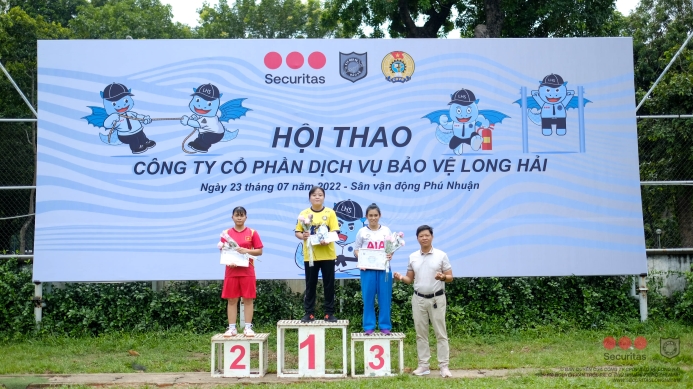 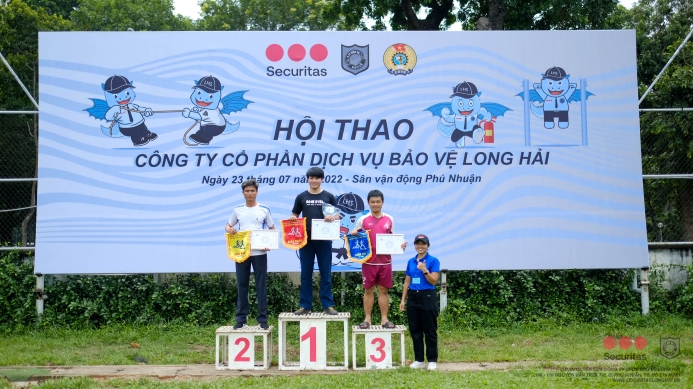 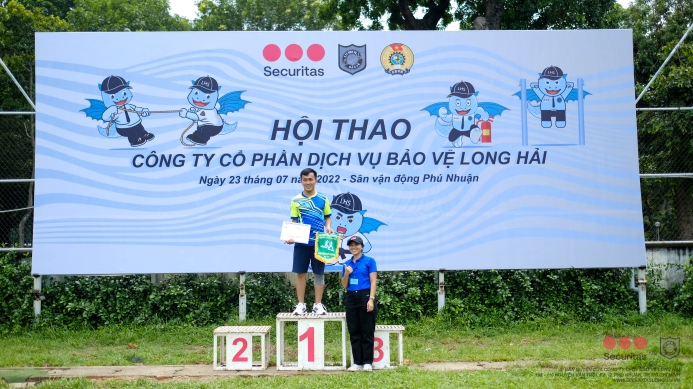 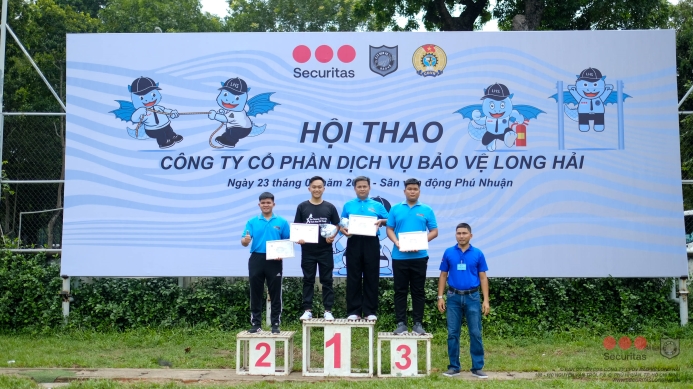 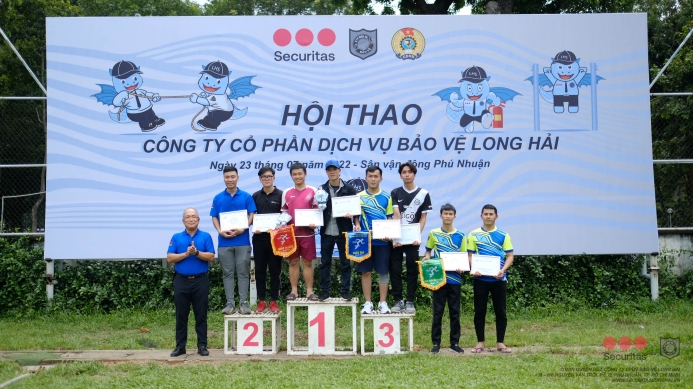 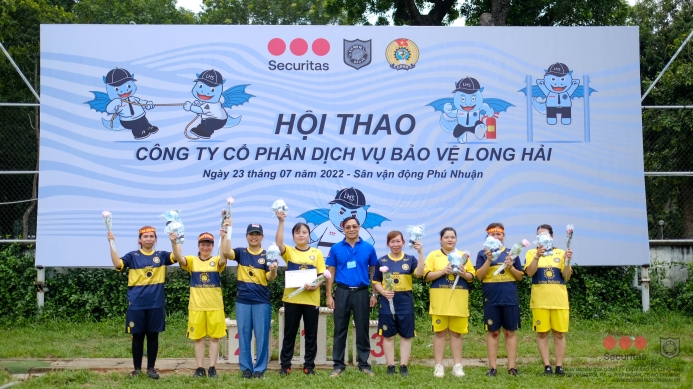 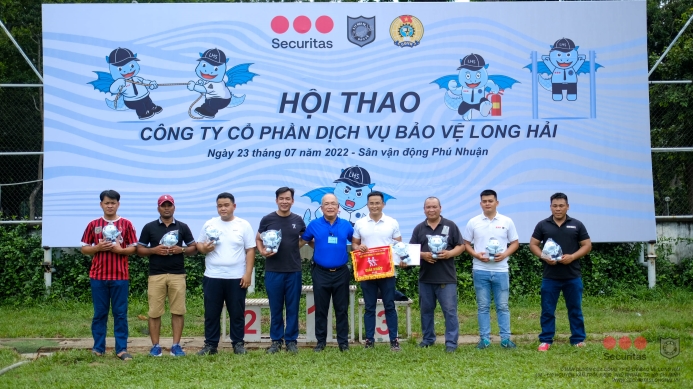 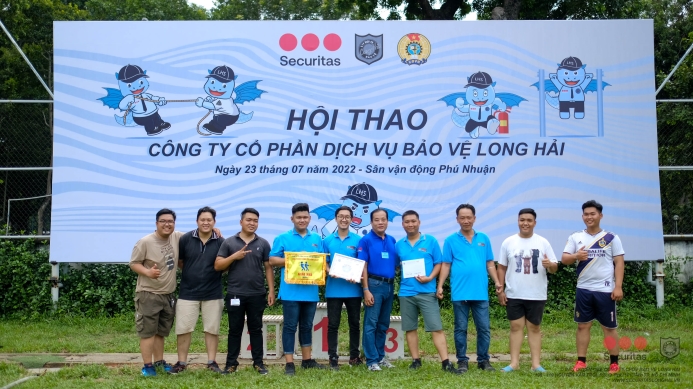 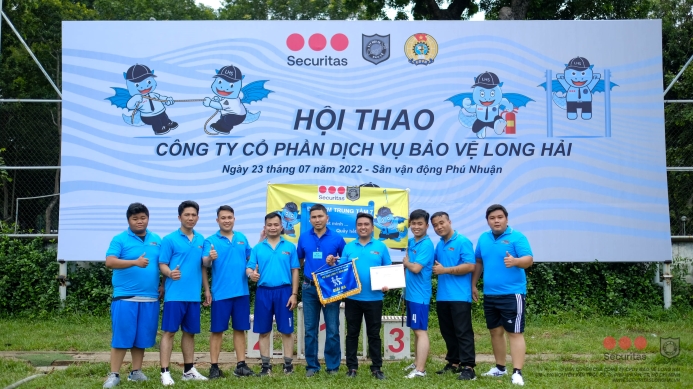 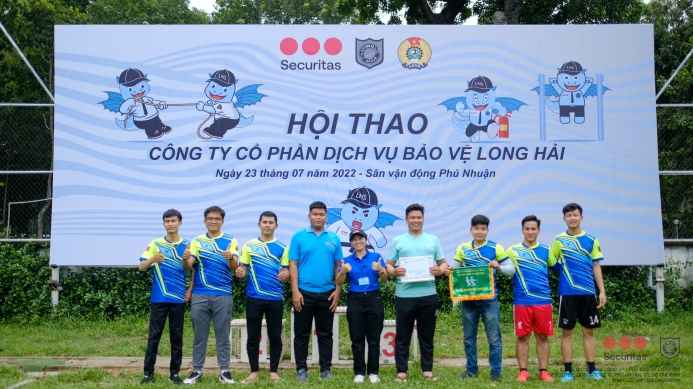 Team Ho Chi Minh East 3 has been awarded the Supporters and Team awards by the organizers with the highest number of fans and the most participation in many sports. 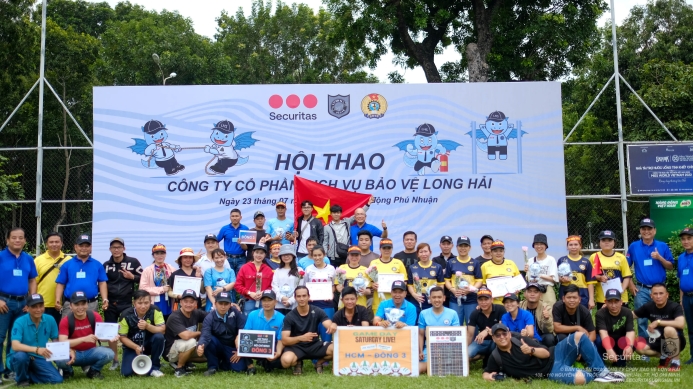 And behold, in the hands of the athletes who won first place was the "Anh 5 Dragon" mascot that first appeared almost 1 year after the concept was designed; the mascot was created for all of us to remember Uncle Nam, grandfather, father and affectionate person to all employees in the Long Hai's family.

Please keep practicing. We will keep this in mind and continue to put it into our company's annual activities.

"We help make your world a safer place."

On behalf of the Board of Directors and the Organizing Committee, thank you all for coming to the Company's Sports Day.